Political advertising has got smarter – but have we? Lush and Fat Rat Films have released a quirky drama-documentary, combining expert interviews with the likes of Guardian journalist, Carole Cadwalladr, and old-fashioned alien invasion melodrama. The documentary introduces the viewer to psychographic advertising techniques and explains how data from social media platforms may be fuelling them.

We went along to the preview at Lush Studio Soho and later spoke to the documentary’s director, Adem Ay, and teen cast member, Lee Brown, about their thoughts on the Cambridge Analytica files and whether they see democracy as being under attack. 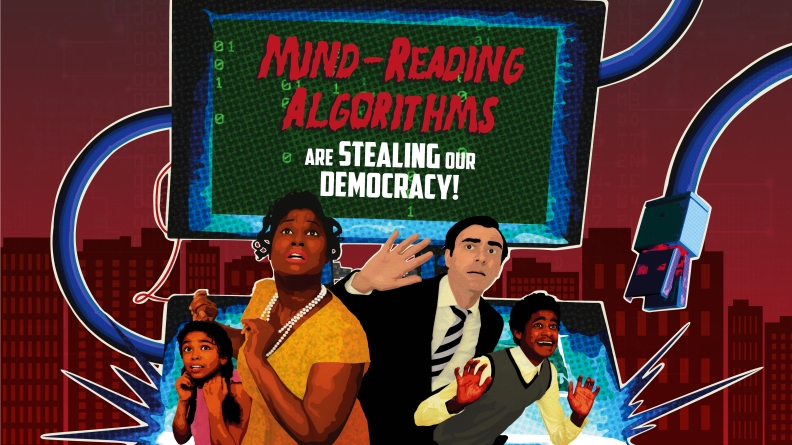 Adem told us that these new techniques may have tipped the balance in close elections such as the Brexit referendum and the election of Donald Trump.

WD: For many people, the topics of psychographics and data manipulation can feel very alien, and this is reflected well throughout the documentary. How difficult, or easy, was it to translate such a complex topic into something so engaging?

AA: Great to hear you were engaged by the film. It was actually very difficult. The topic touches on issues of politics, privacy, technology… these are big issues! And knowing what to focus on took a lot of time and research. Luckily we had some great interviewees who could talk about this stuff in an everyday way.

WD: The Cambridge Analytica scandal has thrust Facebook into the spotlight across the globe, particularly in Europe, the US, and in India. Do you think that social media users will now tread more carefully online or do you expect to see behaviours remain largely the same?

AA: Facebook scandals have come and gone before with little change. But I think this time is different. Governments realise they are not keeping up and people are at risk. My guess is people will largely use social media as before, but they will expect more protection from their governments now. And the laws will gradually reflect this.

“Politics is polarised, and at a knife edge right now, and small changes in voter behaviour really resonate.”

WD: Targeted advertising is nothing new and has always been a fundamental part of election campaigning. What makes the recent digital advertising campaigns that took place in the elections of Trump and Brexit different and scarier in your view?

AA: I think the shock of Trump and Brexit, and the close margins of the results, has made people look more closely at the campaigns and the techniques used. Politics is polarised, and at a knife edge right now, and small changes in voter behaviour really resonate. It’s made these techniques very powerful in the overall balance of a result.

WD: Whilst on the losing sides, this kind of advertising was used by both the Clinton and Remain campaigns and undoubtedly would have helped them win votes. However, there is a sense that social media particularly benefits anti-establishment campaigns. How true do you think that is and why do you think that is the case?

AA: It is true, and true for the same reason that ‘fake news’ proliferates over mainstream news on social media. Basically it’s about clickbait. If you create content that will get a reaction (ie. a click) it makes Facebook more advertising revenue, so not only will they promote it more, they promote it for cheaper. It’s like the inverse of how advertisers used to have to pay more to TV companies to get their ads on in primetime. Facebook charged Trump less money to advertise on their platform than Hilary because their algorithm worked out that Trump’s outrageous ads would get more clicks than Hilary’s more subdued messaging. The problem with Facebook isn’t just how lax they are with their users data, it’s their entire advertising business model that encourages outrage and polarisation and often lies.

Lee explained how old social media posts can be unreflective of people’s true personalities and backed the right for users to have their childhood digital footprints deleted from the internet.

WD: Young people are at the forefront of social media, and many will increasingly be unable to remember a world where it didn’t exist. Has the way you feel about social media changed since filming the documentary and do you think that young people in general fully understand the way their data is being used yet?

LB: Since being involved in the making of this documentary I have become more aware of how the information collected on these platforms can be misused. However I have always personally been careful what information I post. In general I don’t think the younger generation understands how their information is being used or abused. The problem is that as my generation have grown up with these platforms, they are an integral part of their lives and they rely on them as part of their every day life.

“I believe that everyone should be permitted to remove information about themselves that no longer reflects who they are, whatever their age.”

WD: Many people will have first created their social media accounts when they were teenagers (or perhaps younger) and will therefore have a much larger digital footprint. Should these users, in your view, have a right to have that childhood footprint deleted from the internet?

LB: I believe that my 10 year old self doesn’t represent who I am today. Equally when I am 25 I am sure I will regret things I may post today. So, I believe that everyone should be permitted to remove information about themselves that no longer reflects who they are, whatever their age.

WD: Social media can benefit society and democracy in lots of different ways. Last year’s General Election saw what many described as a “youthquake” with lots more young people turning out to vote. A lot of this was driven by targeted advertising encouraging young people to register to vote or by celebrity endorsements on Snapchat and Instagram. How true do you think this is? And should digital political advertising be something that we should be scared of, or just aware of?

LB: I believe it is good to encourage the youth to vote and let them have their say. Using social media as a way to engage active involvement in democrary is a good thing. The scary side is how information can be used to manipulate peoples views, so some form of regularation is required to prevent this from happening.