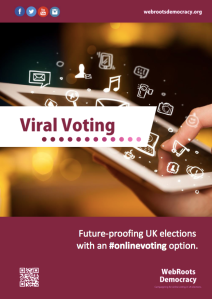 An online voting option in UK elections could increase turnout by up to 9 million, according to a new report ‘Viral Voting’ launched today. The report also finds that online voting could reduce the cost per vote by a third, saving taxpayers £12 million per general election.

The report, by pressure group WebRoots Democracy, is the culmination of over a year’s worth of research into the potential of online voting for the UK. It includes analysis of UK public opinion, and outlines the benefits, challenges, and potential impact of online voting.

The findings show that 65% of the UK population are in favour of online voting. Young people are particularly attracted to the potential of online voting with the report estimating that youth voter turnout could increase to 70%, up from 44% in the 2010 General Election.

The report comes a week before MPs are due to debate the findings of the Speaker’s Commission on Digital Democracy, which included a strong recommendation for online voting to be introduced.

Viral Voting sets out ten recommendations including a target for online voting to be piloted in 8 Mayoral elections (Doncaster; Hackney; Lewisham; Manchester; Newham; North Tyneside; Tower Hamlets; and Watford) and for the public to be able to vote online in the 2020 General Election.

The report also calls for online voting to be introduced in Trade Union strike ballots by 2016.

“The UK is a politically active nation online, and we need to translate this passion to voting: the bedrock of our democracy. Analogue methods of politics will increasingly become incompatible with the digital world of today.” 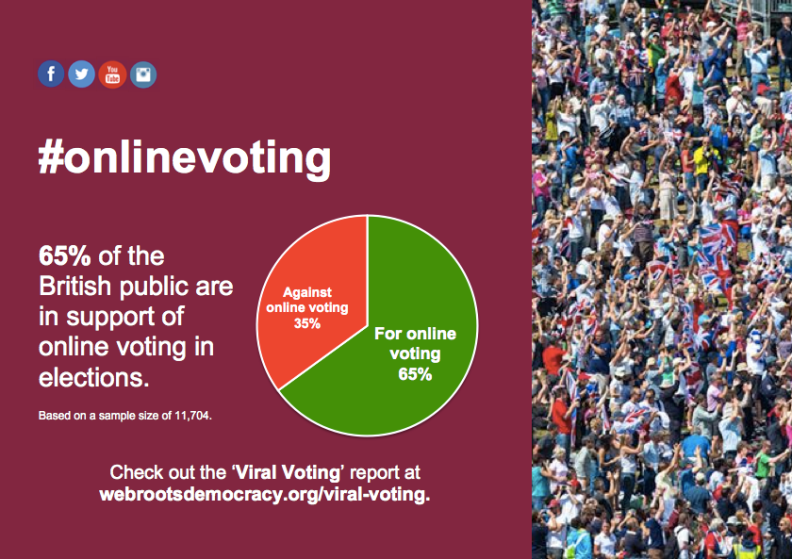 The report contains forewords with support from a range of voices including Members of Parliament, Graham Allen and Chloe Smith, as well as the General Secretary of the Trades Union Congress, Frances O’Grady.

“Turnout for the last general election was only 65%. This is not an acceptable state of affairs for a modern democracy. We need new and innovative ways to get British people voting again.”

“This report is well-timed and stuffed full of smart facts that make the case for future-proofing our democracy. The technical method in which we vote isn’t everything – ideas, policies, leadership, vision, involvement and achievements are paramount – but our democracy will wither if it doesn’t keep up with the way people live their lives.”

“It is in everyone’s interest to ensure that as many people as possible participate. But the government has saddled unions with twentieth century postal balloting methods that make it harder for working people to do just that.

Online voting is the way to bring balloting bang up to date and help ensure some equality in the workplace.”