On November 6th, we held a panel discussion in the House of Commons to launch our latest report: Cost of Voting. The report is the first of its kind, and assesses the potential impact of an online voting system on voter turnout and the public purse.

Speaking on the panel, we had Areeq Chowdhury (Chief Executive, WebRoots Democracy); Dr Toby James (Senior Lecturer in British Politics, University of East Anglia); Darren Jones MP (Labour Member of Parliament for Bristol North West and member of the Science and Technology Select Committee); and Mike Summers (Program Manager of Smartmatic). The event was kindly chaired by Anna Wallace, Advisory Council member, and the Director of Political Relations at PwC. 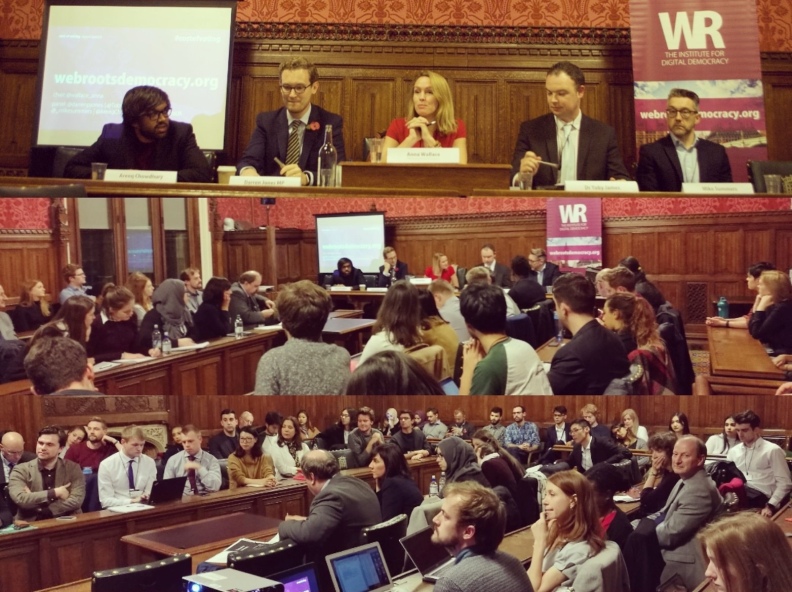 The event opened with a quick summary by Areeq Chowdhury of the purpose, findings and recommendations of the report. Based on 400 FOI requests, a YouGov survey of over 1,600 adults, and a roundtable discussion, the report found that:

The discussion which followed centred on around five main topics:

All panellists agreed that democratic engagement in the 21st century cannot rely on systems conceived in 1872. Increasing the accessibility of politics in line with broader technological trends is essential if trust in democracy is to be maintained

Toby James pointed to a body of research showing that the easier you make it to vote, the more likely the electorate are to do so. Darren Jones MP stressed the need to modernise democracy more broadly, and described some of his own successes with platforms like Facebook Live at engaging his constituents.

Quite apart from online voting, technology could be used to improve and modernise parliamentary functions, engagement with the electorate and electoral administration. Plenty of examples were put forward by the panel including electronic voting in the chamber and replacing poll cards with SMS messaging.

Yeesh – according to @_mikesummers it costs £10.7m to print 43m polling cards

Building on the evidence presented in the report, Toby James drew on his own research which showed that local authorities were increasingly overspending their electoral administration budgets. Those with severe budget constraints had no money for public engagement, and saw falls in voter turnout as a result.

A deputy returning officer in attendance echoed this. Pressures on time, money and effort in his constituency make pilots of online voting a no-brainer.

In an era of local government budget cuts, ways of improving efficiency and cost-effectiveness must be properly explored or democracy will be a major casualty.

There are understandably heightened anxieties about elections being hacked by foreign agents, and the security of online voting is a fundamental issue to address. The discussion centred first on how the systems are secured, and secondly, how that security is communicated to the public.

Mike Summers described Smartmatic’s security processes in detail, and pointed to the wider security trends in the sector. He also drew attention to Estonia who had successfully combatted interference in their online voting system by Russia, an historically hostile neighbouring state.

In terms of communicating this issue to the public, some of the main talking points were:

Following the report’s main recommendation, pilots were agreed upon as the primary means by which to get the ball rolling. Running pilots for military personnel abroad, or voters with disabilities seems an obvious place to start, with local elections as a logical next step.

These could be run at low risk, low cost, and would test the principles and operation of online voting. Darren Jones MP pledged to do all he could to get a pilot done in Bristol’s local elections.

The question is now when, not if – it’s beyond time to pilot #onlinevoting and spark the move to modernise UK democracy #costofvoting https://t.co/EV8JuIrDVx

Areeq spoke of the importance of building cross-party support for the movement. The organisation had successfully recruited MPs from all major parties to be Political Ambassadors, and the report was endorsed by Liberal Democrat leader Vince Cable and Shadow Chancellor John McDonnell.

While Conservatives such as Lord Lexden and Matt Warman MP have made invaluable contributions to the work of WebRoots, building support from the party remains an important and necessary objective. Younger members are generally more receptive. There was a sense of optimism however that we would soon start to see more willingness by the party to get on board.

Great to hear @darrenpjones talk about #costofvoting where are the @Conservatives on the panel? #dissapointed

Darren Jones who sits on the Science and Technology Select Committee announced that he would push for an inquiry into online voting. This was greeted with great enthusiasm as it would represent a big step forward in the movement. He also spoke of the need to develop a culture within local and national government of support for these kinds of technologically-driven reforms.

Keeping the ball rolling through events, reports, conversations and political pressure was agreed by all to be a key objective in the coming months, as we draw closer to what Areeq and the WebRoots team view as the inevitability of an online voting system.

Great to speak @WebRootsUK #costofvoting report launch tonight. eVoting is a no brainier. We need to get on with it! https://t.co/Md70pExbFk pic.twitter.com/JqWT23C7MJ

Events like these show that the support for online voting is rapidly gaining traction among the public, senior politicians and electoral administrators. We’d like to thank our panellists, chair, attendees, and all those who contributed to the report.

View all posts by webrootsben