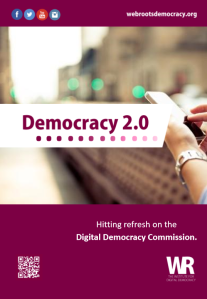 Teenagers should be taught to critically analyse what they read on the internet to help tackle the rise of ‘fake news’, the Institute for Digital Democracy (IDD) has said in its latest report.

The recommendation – made as part of a report to mark the two-year anniversary of the Speaker’s Commission on Digital Democracy – comes as politicians and social media platforms grapple with the fake news phenomenon. The report, Democracy 2.0, also calls upon the Electoral Commission to introduce an official voter advice application for the 2020 General Election.

Coinciding with the publication, the IDD has announced its group of Political Ambassadors consisting of MPs from nine different UK political parties, to champion digital democratic reform.

Writing in the foreword of the report, Labour’s Shadow Minister for Voter Engagement and Youth Affairs, Cat Smith MP, said:

“Our young people are leaving school without a solid understanding of the political system. This can present barriers at elections and referendums, when young people are expected to be engaged and cast an informed vote. Voters also rely too much on information from the third sector, with no official voter advice provided by the state. At a time when we see the rise of ‘fake news’ and internet trolling, it is more important than ever to strengthen our democracy by increased participation.”

Commenting on the launch of the report, the IDD’s Chief Executive, Areeq Chowdhury, said:

“Fact-checkers and Facebook won’t end the problem of fake news. The answer is to teach kids to critically analyse what they read online. By failing to ensure that our democracy is keeping up-to-date with technology, the Government risks leaving our political process stuck in the 1900s. The Speaker’s Commission on Digital Democracy made a very strong set of recommendations, including ones on political education and online voting, and it is a shame to see that the Government has taken little to no action and is instead prioritising voter identity checks rather than reforms that are actually needed.”

Beyond its recommendation on political education, the IDD’s report also calls for the Government to create a Digital Democracy Czar who would have responsibility for pushing forward the digital democracy agenda, and for Parliament to embrace digital reform as part of its restoration and renewal programme.

The report highlights that some progress has been made to digitalise Westminster over the last two years, pointing to select committee use of social media and electronic counting for recording votes. However, the IDD says that more needs to be done for modern mediums of digital communication to run alongside Westminster’s corridors of antiquity and tradition – with the Palace’s upcoming restoration programme providing the prime opportunity for this.

The IDD is also calling for the Government to initiate pilots of online voting and for the Prime Minister to engage in monthly “Digital PMQs” via Facebook Live.