The announcement comes after criticism from the Conservative Party that strikes go ahead despite low turnouts.  The Conservatives have instead called for the introduction of minimum thresholds.

The Business Secretary is launching a special task force to look into the new approach.

The move reflects one of the ten recommendations in WebRoots Democracy’s recent ‘Viral Voting‘ report which stated that the Government ‘should overturn legislation blocking online voting in Trade Union ballots and introduce online voting for Trade Union strike ballots by 2016.’

“It is in everyone’s interest to ensure that that as many people as possible participate.  But the government has saddled unions with twentieth century postal balloting methods that make it harder for working people to do just that.

Online voting is the way to bring balloting bang up to date and help ensure some equality in the workplace.” 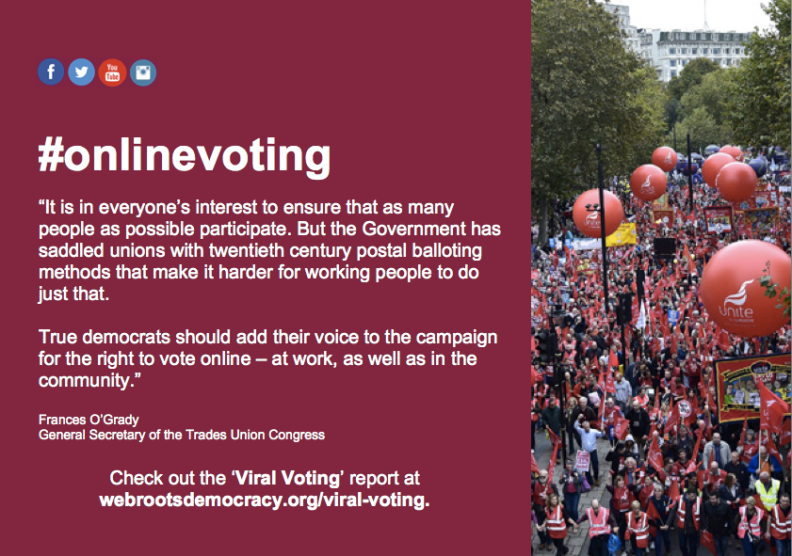 “We currently enjoy some of the best industrial relations in a generation, with overall strike days at an all-time low.

Unions have been central to our economic recovery by keeping employees flexible, so we could keep Britain working.

The Conservatives have an ideological aversion to trade unions and have repeatedly tried – and failed – during this Parliament to curtail their mandate, such as trying to impose an arbitrary minimum threshold for vote turnouts.

Under current laws, all union votes require a postal ballot.  If implemented, it is likely to boost the case for online voting in political elections.