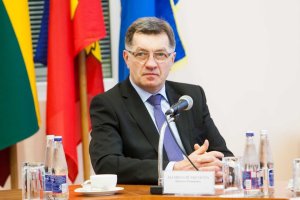 It has been reported that the Lithuanian Government has approved a proposal put forward by Members of Parliament to introduce an online voting option in elections.  This covers Presidential, Parliamentary, Local, and European Parliament elections.  It also covers referenda.

A survey conducted by the Lithuanian Ministry of Justice found that 65% of Lithuanians are in favour of online voting.

In a press release, the Prime Minister, Algirdas Butkevičius said that “such a form of voting is very relevant for people of younger age, furthermore, online voting would be a far more convenient option for citizens who live outside Lithuania.”

The system will mirror the Estonian method of online voting and allow the public to vote online multiple times with only the last vote counting.  This acts as a safeguard against voters being pressured into voting for a particular party and acts as a disincentive to vote-buying.

The population of Lithuania stands at more than double that of Estonia at almost 3 million people.