In the first of our series of topical seminars, WebRoots Democracy explored blockchain and its applications for democracy. This took place at Newspeak House, a London-based institution for political technologists. 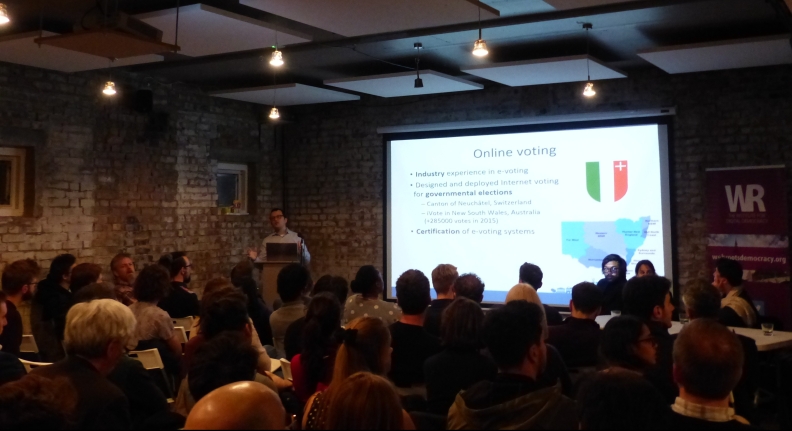 It was a fascinating evening covering the potential and pitfalls of blockchain when it comes to online voting platforms, statement voting, and liquid democracy. A recording of the event can be viewed on our Facebook page, but here’s a short summary of what was discussed as well as my thoughts and takeaways from the evening.

Following the consensus, the distributed ledger is updated and all nodes maintain their own identical copy of the ledger. Any changes or additions to the ledger are reflected and copied instantaneously to all nodes. This therefore enables transactions to have public witnesses, increasing the difficulty of cyber-attacks.

Traditional ledgers are used everyday, primarily to record economic transactions in accounting. This could be a physical book or a spreadsheet on a computer. These are however centralised and not shared, replicated, and distributed like blockchain. The blockchain ensures that transactions are sequential and time-stamped. They are immutable, meaning the record of how transactions were undertaken is resistant to tampering. 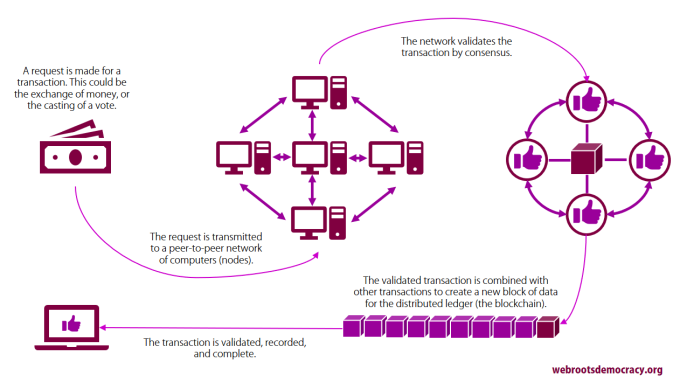 Blockchain forms a core component of Bitcoin, the worldwide cryptocurrency, and is often talked about for its potential in other aspects of society such as democratic participation.

Is the Qur’an the original blockchain?

Reading around on the subject, I’ve noticed that Google Docs is often used as an example to help explain how blockchain works. The functionality is similar in the sense that many users distributed across the globe can edit, by consensus, a single document and be made aware of any alterations, just like blockchain.

However, the first example or comparison that came to my mind is the Islamic holy text, the Qur’an. In order to avoid alterations of the message, the Qur’an has for centuries been memorised by millions of Muslims across the world. If all copies of the Qur’an were to be destroyed, the record of the text would exist word-for-word in the minds of millions of people, and by consensus they could re-write the original version. Any slight mispronunciation, or misspoken word would be noticed and rectified.

Much like blockchain, it is an immutable record, consensually validated by a distributed network.

A significant innovation related to distributed ledgers are ‘smart contracts’. Smart contracts are digitally signed agreements between two or more parties. With smart contracts, the execution and enforcement of contractual agreements is done automatically by software agents (computer programs acting on behalf of a user, like a literary agent would for an author) when certain conditions are met.

A triggering event for a smart contract could be a specific date or price (e.g. of bitcoin) being met. These contracts have the potential to remove the need for intermediaries in business or political transactions.

How could blockchain work with voting?

The potential for online voting is that by using the blockchain, auditors, voters, and other stakeholders should be able to verify the presence of all encrypted votes that have entered the system and have been successfully cast. The nature of blockchain means that auditors could confirm that no legitimate votes have been tampered with or deleted, and that no false votes have been added.

In Dr Galindo’s view, with voting it isn’t necessarily ‘blockchain or bust’. There are a number of existing online voting systems which work a lot better. The pitfalls of blockchain were covered in the ‘refreshingly gloomy’ talk by Dr Meiklejohn.

The stumbling blocks of blockchain

The key takeaway I had from the evening, is that blockchain has potential, and potential that is perhaps yet to be fully realised. There are a number of obstacles which need to be overcome before the technology can be sufficiently applied for social, rather than financial, purposes.

Dr Meiklejohn highlighted these obstacles which include usability, governance, and privacy. 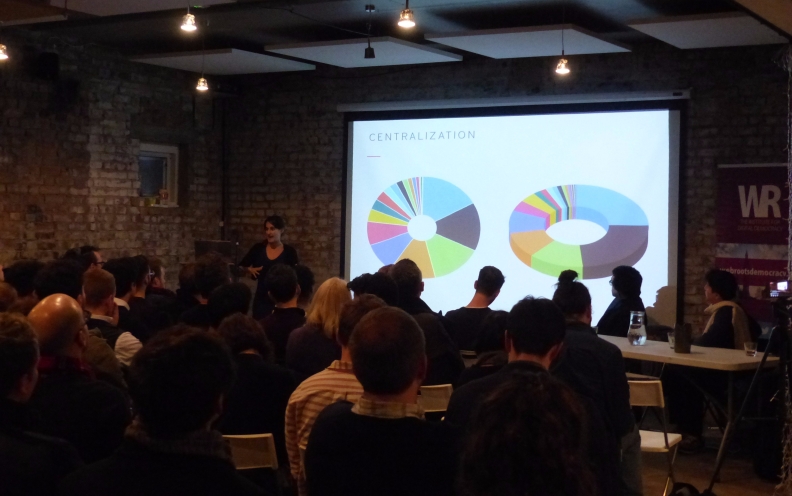 The governance of blockchain is another significant obstacle. This involves ‘mining’ which is the process carried out to add transactions to the blockchain. Mining is the review process performed on each block of data, to allow for consensus on the validity of the transaction.

Dr Meiklejohn challenged the idea of decentralisation in blockchain as in the examples of Bitcoin and Ethereum, the distribution of mining is dominated by a handful of entities. This means that a single entity could have a lot of control over what makes it into the ledger, which is more akin to centralisation as opposed to decentralisation. This accumulation of soft power is an issue which Hanane Boujemi also highlighted as part of her research on internet governance. 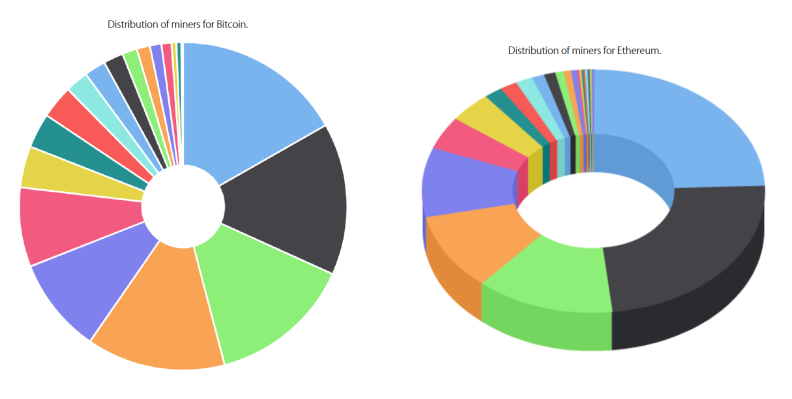 The privacy of blockchain is another issue when it comes to applying the technology to voting. Ensuring the anonymity of users is not something which has been sufficiently achieved by existing applications in Dr Meiklejohn’s view. For voting, this would be a key challenge, as the anonymity of the voter acts as a disincentive to actions such as vote-selling or coercion.

Under this system, voters can either vote directly on policy issues, or they can delegate their votes to representatives who vote on their behalf. For example, if there was a vote on climate change issues, a voter may decide to delegate their votes to Greenpeace as they may believe them to be more knowledgeable than themselves.

Existing liquid democracy systems include Google Votes, the DAO (Decentralised Autonomous Organisation), and Liquid Feedback. A problem, however, for liquid democracy platforms is that privacy for the voter is compromised.

Statement voting is a newer concept where the voter defines a statement in their ballot, but leaves the vote undefined during the voting phase. During the count, the conditional actions expressed in the statement is carried out to determine the final vote. An example of this is the Single Transferable Vote system, in which voters rank candidates in order of preference.

These concepts of liquid and statement democracy are ideas which benefit from blockchain technology and smart contracts. Although, as Dr Meiklejohn and Hanane Boujemi highlighted, they are not without their challenges.

Is blockchain the future?

What was clear from the discussions is that whilst the potential is real, and significant, it is no panacea. Its application thus far has been primarily for financial transactions which do not meet all of the qualities necessary for social uses such as elections. The usability of the data needs to be vastly improved, as does the question of privacy and governance.

Blockchainers always talk about the beauty of trustless systems: that block chain allows mathematical proofs to verify a state of affairs (vote, bitcoin transaction etc). But for social uses, people need to trust the system as a whole. It needs more than maths. #WebRoots

The immutability of the process provides reassurance over the fear that votes may be undetectably changed en masse. The public nature of the blockchain also delivers a pathway to greater transparency over digital tallying of votes.

Whilst it will very likely play a bigger role in the future, as Dr Galindo stressed, blockchain is not the only technology that can enable a secure digital democracy, there are countries, such as Estonia and Australia, who have already experienced success with online voting platforms. In the future, we will likely see an amalgamation of different technologies and processes, including blockchain. It is not simply going to be blockchain or bust.

One Reply to “Blockchain and its applications for democracy”