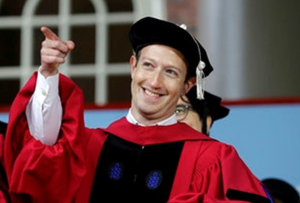 Facebook founder and CEO, Mark Zuckerberg called for “modernising democracy” with online voting as part of his Harvard University commencement speech this week. Having dropped out of Harvard to pursue his work on Facebook, Zuckerberg was finally awarded his degree and delivered Harvard’s 366th commencement speech.

As part of his address, he praised idealism and warned students to “be prepared to be misunderstood”:

“Anyone working on a big vision will get called crazy, even if you end up right. Anyone working on a complex problem will get blamed for not fully understanding the challenge, even though it’s impossible to know everything upfront. Anyone taking initiative will get criticised for moving too fast, because there’s always someone who wants to slow you down.”

He then went on to list achievements that are “within our reach” including stopping climate change, ending diseases, and online voting:

“So what are we waiting for? It’s time for our generation-defining public works. How about stopping climate change before we destroy the planet and getting millions of people involved manufacturing and installing solar panels? How about curing all diseases and asking volunteers to track their health data and share their genomes? Today we spend 50 times more treating people who are sick than we spend finding cures so people don’t get sick in the first place. That makes no sense. We can fix this. How about modernising democracy so everyone can vote online, and personalising education so everyone can learn?

These achievements are within our reach. Let’s do them all in a way that gives everyone in our society a role. Let’s do big things, not only to create progress, but to create purpose.”

You can read the full transcript of Mark Zuckerberg’s speech here.