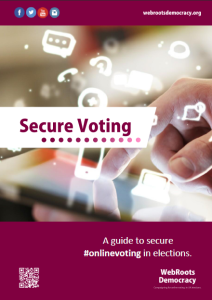 Online voting can be made sufficiently secure and should be introduced for the 2020 UK General Election, according to a new report ‘Secure Voting’ launched today.  The report, backed by MPs from across the political spectrum, is written by global experts and academics in the electronic voting field and examines the key security challenges facing the implementation of online voting for UK elections.

The report, by pressure group WebRoots Democracy, covers areas such as cyber-attacks, voter coercion, and malware on devices.  The 30,000 word document is made up of contributions from e-voting experts from the UK, USA, Spain, and Estonia, including UK-based companies Electoral Reform Services, Mi-Voice, and Smartmatic as well as computer scientists Dr Kevin Curran from the University of Ulster and Professor Robert Krimmer from Tallinn University of Technology.

Secure Voting makes three recommendations which include calls for the public to be able to vote online in the 2020 General Election and for pilots to be run over the course of this Parliament.

The report points out that voter turnout increased by just 0.3% last year compared to 2010, and highlights research by Ipsos Mori which shows that youth voter turnout was less than half for the fourth General Election in a row.  It also includes analysis which shows that an estimated 95% of the UK’s over 19,000 elected politicians were elected on turnouts of less than 50%.

The publication coincides with the anniversary of the Speaker’s Commission on Digital Democracy report which last year recommended that online voting be introduced by 2020.

“The Government have said they are open to online voting, and the Prime Minister himself said on live TV that he has no objection to it, however what they have wanted to see are assurances that it can be made sufficiently secure.  This report provides those assurances and those assurances are backed up by decades of experience in electronic voting and internet security.Research has shown that there are a plethora of benefits to online voting which go beyond boosting voter turnout.  In addition, opinion polls show that the public want to be able to vote online and that it would be the most popular method if introduced. Time is ticking for 2020, and now is the time for the Government to commit to bringing it in.” The report contains forewords with support from a range of voices:

Speaker of the House of Commons, John Bercow said:

“The Speaker’s Commission on Digital Democracy was a product of this desire to open up Parliament and to improve the way we interact, with a focus on how digital technology could widen participation in politics, with a view to encouraging more effective engagement. I look forward to the contribution to the discussion the release of the WebRoots Democracy report has, and the debate that will follow.”

“Sensibly legislating and implementing e-voting can be done if politicians admit that it is almost immoral by now to fail to consider it.  It is a sizeable project and we should start it.”

“Change does not happen overnight, and modernising elections will take time, however, if we are serious about creating a twenty-first century democracy, online voting is a reform that must be given serious attention.”

“This issue is about engagement and confidence in our democratic system. Whilst the voting system is stuck in the same yesteryear of pen to paper and manual counting – society will move on and our democracy will be stuck in the past. We cannot languish any longer, the UK Parliament and our voting system must develop into the 21st Century.”

“I welcome this stellar report produced by WebRoots Democracy. It provides an excellent explanation of the effects of online voting and its importance to the future of our political institutions. It satisfies the need to produce a secure, but more accessible means of casting a ballot. We must take this opportunity to push our nation in a direction that allows everyone to exercise their right to vote and exercise it easily.”

2 Replies to “REPORT: Online voting can be secured and should be an option in the 2020 UK General Election”