More than half (56%) of the British public who are online support the inclusion of an online voting option in the upcoming EU referendum, a new YouGov poll commissioned by WebRoots Democracy has revealed.

The online poll of 1,543 adults in Great Britain, also found that more than 50% of voters for each of the four main political parties (Conservatives, Labour, Lib Dems, and UKIP) back the reform with support particularly high amongst Liberal Democrat voters (66%). 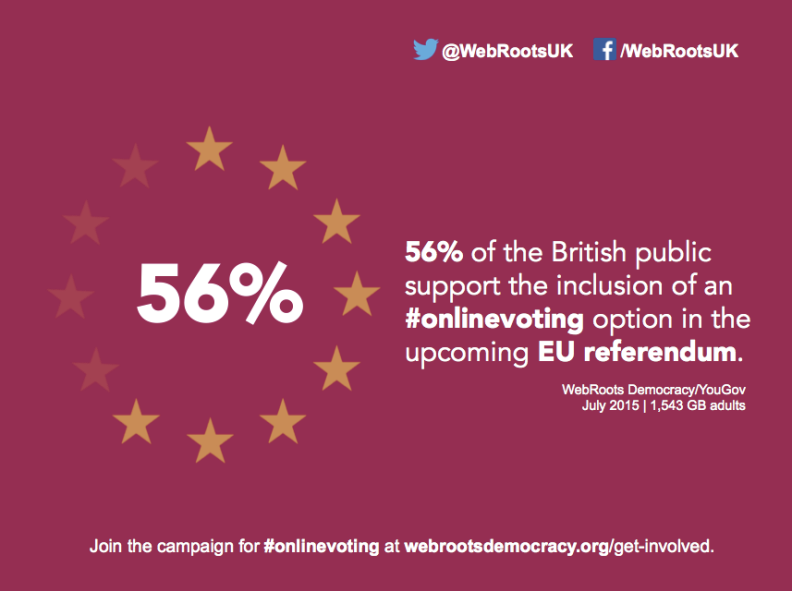 Across the country, support is strongest in London (59%) with each of the other regions (Rest of South, Midlands/Wales, North, and Scotland) also showing support of more than 50%.

In another WebRoots Democracy/YouGov poll released today, 59% of Londoners who are online are in favour of implementing an online voting option for the 2016 London Mayoral Election.  The poll of 1,047 adults in London, also found that support was particularly high amongst Labour voters (70%).

WebRoots Democracy is calling for the introduction of an online voting option and warns that the Government risks being complacent on voter turnout for the referendum.

With turnout in the last UK-wide referendum (on AV), in 2011, being 41%, and last year’s European Parliament elections experiencing an even lower turnout of 34%, there is no guarantee that a high turnout in the EU referendum will occur.

“The decision on whether or not the UK stays in the EU will affect all of us, and it is vital that this decision is made by as many of us as possible.

It’s important that we do not over-hype the public’s engagement on the EU question. If the European Parliament elections last year are anything to go by, the majority of the electorate may end up not taking part in the referendum.

Online voting should be taken seriously by the Government and plans for its implementation should be drawn up at the earliest opportunity.”

Figures released last year, by the Office for National Statistics, showed that 76% of the adult population use the internet on a daily basis.