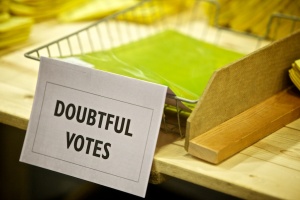 Figures compiled from 100 constituencies by WebRoots Democracy have shown that over 4,000 ballots were rejected due to voters accidentally ticking more than one candidate in the 2015 General Election.  In each of these constituencies, votes were rejected and discounted for this reason.

The total amount across the 100 constituencies examined is 4,232.  This is based on the election result declarations published by local authorities.  Not every local authority has decided to publish a detailed breakdown of spoilt ballots.

The estimated total across all 650 constituencies is 27,500.

Local authorities reject ballot papers due to ‘want of an official mark’; ‘voting for more candidates than the voter was entitled to’; ‘writing or mark by which voter could be identified’; or ‘being unmarked or wholly void for uncertainty.’

The constituency with highest number of rejected ballots due to votes for more than one candidate was Keith Vaz’s constituency of Leicester East in which 265 people voted incorrectly.  The constituencies with lowest number of accidentally spoilt ballots were Aberdeen South and East Lothian with 5 each.

Voters who accidentally spoil their ballots are never informed that their votes are not counted.

One of the reasons for online voting cited in the Viral Voting report published in March was to significantly reduce the number of accidentally spoilt ballots and to ensure that every vote counts.  Under an online voting option, it would be unlikely that a voter would be allowed to submit a votes for more candidates than the voter is entitled to.

The average number of accidentally spoilt ballots across the 100 constituencies is 42 which is the same amount as the narrowest majority of the election gained by the Conservative’s Amanda Solloway in Derby North.