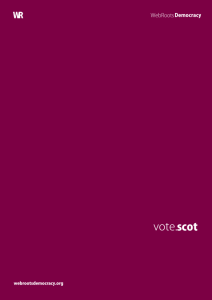 Vote.Scot is WebRoots Democracy’s submission to the Scottish Government’s consultation on electoral reform.

It makes the case for pilots of online voting in Scottish elections, and has been submitted alongside some of our previous research in this area in addition to our open letter to the Minister for Parliamentary Business.

The document sets out 3 recommendations:

“Online voting not only has the potential to revolutionise elections and enable the greatest level of accessibility for traditionally marginalised voters, it will inevitably become part and parcel of elections in the future both here and abroad. It is right that we take the reform seriously and begin exploring how best to implement and regulate it.”

“Technologies to fully realise this notion of voter verifiability are still under development. They have been used for professional association elections and university elections, and now they are beginning to be used for large-scale political elections in Estonia and in New South Wales, Australia. We salute and support the Scottish Government’s commitment to pilot them for elections in Scotland.”

“Technology has significantly moved on since the last trials of online voting in the UK. Moving forward with small scale trials can help clarify the benefits of online voting for political elections in Scotland and generate valuable feedback to shape future technological developments.”